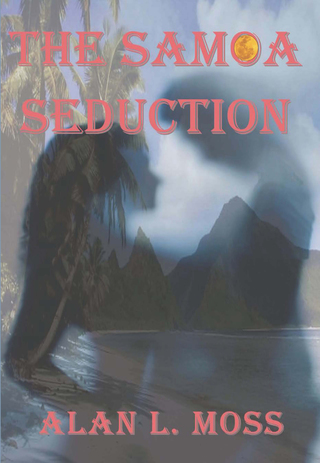 "In the Samoa Seduction by author Alan L Moss, readers gain entry into the highly secretive world of the black market drug trade.  The story follows our protagonist, Michael Bloom, a government employee who goes to American Samoa to fight for higher minimum wages but ends up as the romantic interest of one Stephanie Palaie Moelai.  Readers will have their hearts in their throats to find out if Michael and Stephania make it through the tumult alive."

A thin tool slid under the latch that locked the glass
doors. The instrument popped open the latch. A slender
figure, dressed in black sweats and a hooded sweatshirt,
waited for a pause in the weather. After a few minutes, a
lull in the storm provided an opportunity to slide the door
open and squeeze into the room without much
disturbance. The figure closed the door and once again the
storm outside took over.
For a split second the open door and sound of driving
rain invaded Michael's sleep. He was back in Samoa at
the Agelu Lodge. Then, the sliding doors were open just
enough to hear the gurgling creek outside. He had passed
out on the bed, intoxicated by Ava. Soon, Stephanie
would be on him, eyes aflame with passion, full breasts
inviting his touch.
Demanding to know if this new vision was real or a
dream, Michael opened his eyes. He found a man
standing over him, the ends of a sharp cord wound around
each of his gloved hands. Instinct drove Michael's hands
upward and the assassin's attempt to slip the wire around
Michael's neck caught his forearms. The wire sliced
through the sleeves of Michael's pajamas and cut into his
skin, pain speeding his consciousness.
The man had botched his chance at a quick and silent
murder.
Michael could feel his heart racing. It seemed as if he
was watching a scene in a movie, figuring the guy on the
bed didn't stand much of a chance. Then, a strange thing
happened. It occurred to him that the assassin was
probably relying on surprise. With his enemy's advantage
gone, maybe the guy on the bed did have a chance.