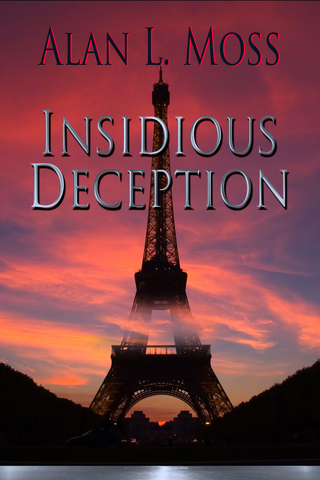 INSIDIOUS DECEPTION is an eye-opening political thriller presenting a unique Middle East peace initiative promoted by international conspirators to launch a U.S. Senator into the White House. Seeking unprecedented riches by cornering the market for rare earth minerals, the conspirators take advantage of a brilliant university professor who has dreams of parlaying the Arab Spring into a Middle East region of democracy, peace, human rights, and prosperity.

In a rare leap from fiction to fact, the novel's Middle East proposal was a subject of discussion at February's Middle East Dialogue 2013 conducted in Washington, D.C. by the Policy Studies Organization of the American Political Science Association. A dramatic vehicle in the world of fiction was transported into the hard realities of international relations.

"Moss sells his tale of terror, political intrigue, and corporate mayhem.  He makes the reader believe that his story could, and even might, happen.  That is no small accomplishment in any genre, let alone a thriller."

"From Jordan to Croatia, Israel, Italy, France, Yemen and the U.S., this thriller brings its readers on an electrifying journey that is vivid and real."

“I talked to the son-of-a-bitch myself. Sat across the desk in the Oval Office. After the dollars we’ve donated, he had the gall to tell me his conservative principles stopped him from undertaking a huge, new government program.

“So, I tell him, what if we were in the midst of World War II and Oppenheimer was in my chair telling him that Germany was working on an atomic bomb and he needed to spend millions to beat the Nazis to it. Would his conservative principles stop him from making the investment?”

The luxury private jet climbed above clouds that indicated turbulence ahead. One of the other four men cleared his throat.

“He said that rare earth metals aren’t components of nuclear weapons. And I said that allowing the Chinese to dominate this market into the next decade or two would be as destructive as a nuclear attack.”

Rex Raymond’s complexion turned bright red and some of the men began to fear for his health. They knew he had high blood pressure and could picture him struck down by a stroke at 51,000 feet.

“So, he says to me that he’s the President of the United States and doesn’t have to listen to that tone of voice. So, I tell him that as far as I’m concerned, if this is the way he treats those who funded his election, he can forget any additional donations during this year’s primaries.”

Another man, with olive skin and dark rimmed eyeglasses, asked the question.

“So, where does that leave us?”

“Of course, we considered this contingency. Our plans are all on schedule. Soon, Byron’s boy will cut through the Congressional bureaucracy like a knife through butter.
All that’s needed is for me to give the go-ahead to remove Hodge. But, I wanted you to appreciate where we are and to provide your sign-off.”

“I just want to be sure of one understanding. The action we are about to take will be invisible. There will be no smoking gun or Warren Commission inquiry.”

“As you well know, nothing in life is certain. But, I can tell you this. There is only one individual aware of each component to this operation and you are looking at him. The others involved are carrying out innocuous tasks that will never be related to one another or to our objective.

One by one, the men placed a closed fist on the table and raised their thumbs. The next day, Rex Raymond would initiate Project Bird Watch.